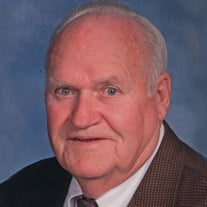 Arthur "Art" H. Kahler, 80, died Friday, Dec. 14, 2018, at a Sioux City hospital. Service will be 10 a.m. Tuesday at Redeemer Lutheran Church. Burial will be in Graceland Park Cemetery. Visitation will be 4 to 8 p.m. Monday, with a prayer service at 7 p.m., at Morningside Chapel, Christy-Smith Funeral Homes. Arthur "Art" Henry Kahler, the son of Paul and Amelia (Kaiser) Kahler, was born April 21, 1938, in Burke, S.D. He graduated high school in Bonesteel, S.D. in 1956. Art went on to graduate with an education degree from Black Hills State College in Spearfish, S.D., before earning his Master’s in Education and Administration from Colorado State in Greeley, Colo. On May 3, 1958, Art was united in marriage with Ruby Pfaff in Herrick, S.D. He was employed as a math teacher and later was a superintendent in Springview, Neb. Art then worked as a principal and teacher in Battle Creek, Iowa. In 1977, he became the Director of Marketing for Blue Cross/Blue Shield for western South Dakota and Iowa, retiring in 1995. Art was a member of Redeemer Lutheran Church in Sioux City for 44 years. He enjoyed fishing, traveling, and playing cards. Art also was an avid sports fan, and even coached football during his teaching days. His greatest love, however, was spending time with his family, especially his granddaughters. Art is survived by his wife, Ruby of Sioux City; his son, Tim (Krista) Kahler of Columbus, Ohio; two grandchildren, Erica (Joe) Laroche and Sarah Kahler, all of Columbus; and many other relatives and friends. He was preceded in death by his parents; one brother; four sisters; and two nephews. The family has requested that memorials be directed to Redeemer Lutheran Church or Hospice of Siouxland.

Arthur "Art" H. Kahler, 80, died Friday, Dec. 14, 2018, at a Sioux City hospital. Service will be 10 a.m. Tuesday at Redeemer Lutheran Church. Burial will be in Graceland Park Cemetery. Visitation will be 4 to 8 p.m. Monday, with... View Obituary & Service Information

The family of Arthur Henry "Art" Kahler created this Life Tributes page to make it easy to share your memories.

Send flowers to the Kahler family.