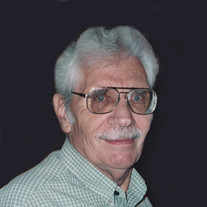 Arlo Deane Herbold, 86, a long time Sioux City resident, died on Jan. 27, 2019, at a local hospital. Services will be 11:30 a.m. Saturday at Faith United Presbyterian Church in Sioux City, with the Rev. David Koehler officiating. Visitation will be one hour prior to the service Saturday at the church. Arrangements are under the direction of Morningside Chapel, Christy-Smith Funeral Homes. Online condolences may be made to the family at www.christysmith.com. Mr. Herbold was born to his loving parents, Ewalt L. and Hazel L. (Seitel) Herbold, on Friday, Jan. 13, 1933, at the family farm home on the outskirts of Pierson, Iowa. He grew up on the farm and attended Pierson Consolidated School, graduating in 1950. He farmed with his father until the fall of 1952 when he enrolled at Iowa State College. Later that year, he was drafted into the U.S. Army during the Korean Conflict. His basic training took place at Fort Riley, Kan. and Fort Benjamin Harrison, Indianapolis, Ind. He was permanently stationed at the 16th Base Post Office at 6th Army Headquarters, Presidio of San Francisco and served as company clerk. Following his discharge from the Army, he returned to Iowa State College and graduated in July 1959 with a B.S. degree majoring in industrial administration. He was a member of the first graduating class of Iowa State University. In August 1958, he was united in marriage to his high school sweetheart, Patricia Ann Denlinger, at Pierson Methodist Church. They were blessed with the birth of a son, Bryan Patrick Herbold on July 25, 1971. He joined the staff of the Sioux City Planning and Zoning Commission in 1958 worked on a multitude of projects all of which were of great interest to him. He served in a number of staff positions from planning technician to director of planning and was a member of American Institute of Certified Planners. Arlo retired in 1995 with 37 years of service and the phrase, "if you have a job you love, you will never work a day in your life" had special meaning to him. He participated in a number of civic activities. He was appointed by the City Council to the Sioux City Planning and Zoning Commission for a four year term and served one year as vice chairman. He was a member of the Adult Education Advisory Board at Western Iowa Tech Community College and served as both vice president and president. Mr. Herbold was long time board member of the Municipal Credit Union and worked on a number of committees and also served as chairman. He was long time board member of the Sioux City Concert Course and often served as both treasurer and secretary. He was proud to be a member of an organization that brought talented musicians to the Siouxland area. In 2003, he dedicated a three acre parcel of land adjacent to the Kingsley-Pierson Middle School for a play field in honor of his grandfather, William Herbold, who had owned the land for nearly 100 years. Arlo was the third generation of Herbold ownership. He had many hobbies including carpentry and woodworking, gardening and landscaping (he attended master gardener classes) and participated in a number of sporting activities and later in life golf became his favorite, especially playing with his close friends. He enjoyed reading books with a special interest in history, archaeology, architecture and of those who were prominent in American life. His favorite quotes attributed to Albert Einstein were, "The difference between stupidity and genius is that genius has its limits" and "A person who never made a mistake never tried anything new." Retirement offered him the opportunity for travel of which he took full advantage covering the continental U.S. and Alaska. He took four trips to Europe with a friend, the most special was a 1995 visit to his ancestral village of Herbsen, Germany from which his grandfather and grandmother immigrated to the United States. This was a most interesting and meaningful trip given his interest in family genealogy. Left to share his memory are his wife, Patricia; his son, Bryan; sister-in-law, Diana Nairn; a niece, Kelli Schutt and her husband, Ryan; his nephew, Brock Harris and wife, Stacy; along with many members of the Herbold family. He was preceded in death by his father, Ewalt; his mother, Hazel; his grandparents, Charles and Ida Seitel, and William and Wilhelmina Herbold; and in-laws, Clair and Adah Denlinger. Memorials may be directed to either Pierson United Methodist Church or Faith United Presbyterian Church, 4327 Morningside Ave., Sioux City, IA 51106.

The family of Arlo D. Herbold created this Life Tributes page to make it easy to share your memories.

Send flowers to the Herbold family.