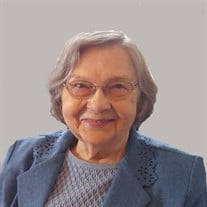 Arlene Larea (Fusch) Hansel, age 92, stepped into eternity on Sunday, May 2, 2021 in Sioux City, Iowa. A funeral service will be held at 10:30 a.m., Monday, May 10, 2021 at Christy-Smith Funeral Homes, Morningside Chapel, 1801 Morningside Avenue, Sioux City, Iowa 51106. A visitation will be held one hour prior to service time. Please visit www.christysmith.com to leave online condolences for the family. She was born January 14, 1929 to Frank and Mary (Svatos) Fusch in Lynch, Nebraska. In 1946 she graduated Lynch Public Schools with both a high school diploma and a Normal Certificate which qualified her to teach in Nebraska. The next three years she taught in one room country schools near the towns of Monowi and Verdel. In 1949 Arlene moved to Sioux City, Iowa to attend Crary Beauty School. She met Bruce Hansel and they were married February 9, 1952. They settled in Morningside and were blessed with two sons, Dennis and Kevin. Arlene worked part-time as a beautician and then as a full-time devoted and skilled homemaker. She was proud of her Bohemian heritage. She learned the Czech language in the home of her maternal grandparents, Jim and Carrie Svatos. Her family heard many stories of her country life and of family history. Long before Ancestry and internet she researched both the extensive Hansel family tree and her maternal family history. She was a member of the Woodbury County Genealogical Society. Arlene loved reading, nature, gardening, crafting and decorating, and sewing for her children and grandchildren. In later years she and Bruce attended dances at the Senior Center. She was a member of Bethel Baptist Church where she joyfully and tirelessly served the Lord using her gifts of teaching in Sunday School and of administration in the new ministry to older adults called Young at Heart. Her favorite times were those spent with family, particularly her grandchildren, Jackie, Tony, and Dennis. Missing Arlene greatly are her sons, Dennis (Martha) Hansel of Omaha and Kevin of Sioux City; her three grandchildren, Jacquelyn (Mark) Chaplin, Tony Hansel, and Dennis (Jessica) Hansel; great-grandchildren, Brandi (Jeremy) Sands, Jacob (Jordan) Hansel, Tyler Dady, and Nicholas and Halie Minard; and great-great-granddaughter Adeline. She was preceded in death by her husband of 52 years, Bruce; her parents; and grandparents. Arlene’s fondest hope and prayers were that her children, grandchildren, great-grandchildren, and great-great-grandchildren would come to have a personal relationship with the Lord Jesus.

The family of Arlene L. Hansel created this Life Tributes page to make it easy to share your memories.

Send flowers to the Hansel family.