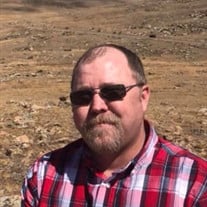 Anthony "Tony" Stephen Bell, 43 of Sioux City, Iowa died on Wednesday, August 19, 2020, in Sioux City, Iowa. A Memorial service will be at 7:00 PM on Monday at Christy Smith Larkin Chapel located at 2320 Outer Drive Sioux City, Iowa 51104 with the Rev. Neil L. Peck officiating. Visitation will be from 4:00 PM to 7:00 PM and the family will be present from 6:00 PM to 8:00 PM on Monday, August 24, 2020, at Christy Smith Larkin Chapel, 2320 Outer Drive, Sioux City, Iowa. Online condolences may be made to the family at www.christysmith.com Tony was born September 19, 1976 in Onawa, Iowa, to Stephen and Sheila (Taylor) Bell. He grew up in Ute and graduated from Charter Oak - Ute High School. He continued his education at Western Iowa Tech Community College. Tony married Jamie L. Kenney on July 22, 2000 in Sioux City. The couple have two children: Parker and Alexis. Tony worked for Suter Services before starting his own HVAC business Element Inc. which he later sold and went to work for WITCC teaching heating and air conditioning classes at his alma mater. Tony missed the hands on work involved with HVAC so he left WITCC and went to work for Prescott and Schramm heating and cooling for a short period of time before starting another HVAC business called Above Par, which he was currently operating. In 2018 Siouxland voted Above Par as one of the top 3 HVAC businesses in Siouxland’s (Reader’s Choice) Awards Tony enjoyed working on cars, remodeling projects, and just tinkering. He enjoyed being Mr. Fixit for his family and friends. He was an avid Minnesota Vikings and NASCAR fan, traveling to many games and races across the country. He especially liked to explore the Rocky Mountains of Colorado with his wife each year. Tony enjoyed family time and attending the events Parker and Alexis were involved in. Surviving are his wife Jamie Bell, son, Parker Bell of Sioux City, IA, daughter, Alexis Bell of Sioux City, IA, parents, Stephen and Sheila Bell of Ute, IA brother, J.D. (Jennie) Bell of Onawa, IA. father in-law Tony Kenney of Sloan, Mother in-law Marilyn (Jim ) Anderson of Sioux City, brother in-law Neil (Jenny) Kenney of Sloan, brother in-law Jared (Allison) Kenney of Sloan, sister in-law Lindsey Kenney of Tampa, FL and numerous nieces and nephews, aunts uncles and cousins. In lieu of flowers memorials may be directed to the family.

The family of Anthony Stephen Bell created this Life Tributes page to make it easy to share your memories.

Send flowers to the Bell family.