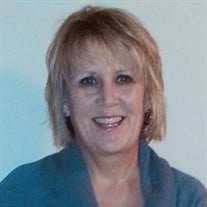 Annette “ Toni” Jones, 57, of Sioux City passed away Monday, January 6th at Abbott Northwestern Hospital in Minneapolis. Services will be held Tuesday, January 14th at 7:00 p.m. with visitation beginning at 6:00 p.m. at Christy-Smith Larkin Chapel. 2320 Outer Drive North in Sioux City. Toni was born on December 20, 1962 in Sioux City to Darrell and Judy Jones. Toni graduated from West High School in 1981. Toni served 3 years in the U.S. Army after high school. After the Army, she went to work for IBP/Tyson and has worked at the Dakota City plant for the past 35 years. Toni was a beautiful, strong, and loving mother, grandmother, and friend. She loved her children, grandchildren, and family more than anything. Toni most enjoyed watching her children and grandchildren in all of their activities. Some of her most happiest times were spent on adventures with the “Big Girls”. Toni had an infectious laugh and a beautiful smile. She always encouraged her children to be happy, and always look for the good. Toni is survived by her daughters, Nicole and Andrea of Sioux City, son, Alex , and daughter-in-love, Demaree of West Des Moines; grandchildren, Nolen, Isabella, Tessa, and Isaiah. She is also survived by a daughter, Katie, with whom she was recently reunited; sister, Chris and her children, Emily, Christopher, and Micco; aunts, Ardith, Marilyn, and Sharon; several cousins; and the “Big Girls”, Barb, Donna, Janet, and Susie. Toni was preceded in death by her parents; aunt, Frances; uncles Earl and Ronald; grandparents, Ernest and Angie Jones, and Mike and Phyllis Mulvihill.

The family of Annette Y. "Toni" Jones created this Life Tributes page to make it easy to share your memories.