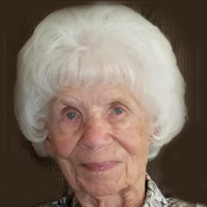 Aniela "Nellie" Grondek, 94, of Papillion, Neb. died Monday, Dec. 7, 2020, in her independent living apartment at Hillcrest Country Estates of congestive heart failure. A visitation will be 1:00 pm to 3:00 pm Sunday, December 13, 2020, at Christy-Smith Funeral Homes, Larkin Capel, 2320 Outer Drive North. Due to Covid-19, numbers attending at the same time will be limited and family will not be present. Mass of Christian Burial will be 10:30 am Monday, December 14, 2020, at Mater Dei Parish-Immaculate Conception Catholic Church with Fr. Andrew Galles officiating. Burial will be in Calvary Cemetery. We urge out of area friends and relatives to not attend and mourn privately. Aniela was born on July 20, 1926, in Balarka, Poland, the daughter of Leon and Feliksa (Zukowska) Grochowska. She came to the U.S. by boat in 1949 with her husband Stanley carrying a new baby son, Roman, who was born in Germany. She lived in Stanton Neb., Randolph, Neb., San Angelo Texas, Sioux City, Iowa and Papillion, Neb. Her family farm in Poland was burned at the start of the Nazi invasion of Poland in 1939 and Aniela became one of the Zivilarbeiter, Polish forced workers in Germany, for over five years in WWII. She had a Arbettsbuch fur Auslander (Workbook for Foreigner) which are her work and identity documents and had to wear the Polish “P” to identify herself. She mostly worked in munitions factories until liberated by the Allies. She married Stanislaw "Stanley" Grondek on Nov. 26, 1946, in Darmstadt, Germany. They met in the Wildflecken Displaced Persons (DP) camp in Germany where Stanley was part of the camps Polish Guard. The couple moved to Sioux City in 1951. They lived in Texas for three years before returning to Sioux City. Mrs. Grondek worked for Armour Packing Co., Burke Lumber Co., Holy Angels School (San Angelo, Texas) Zenith and Interbake. She retired from Interbake in 1991 after 11 years of service. Seven years after her husband died in 2005, caring for a home became too much for her and she moved to Papillion, Neb. to be closer to her sons and their families. She was a former member of St. Francis Church, where she was active working on funeral dinners, parish dinners and bake sales. Aniela was known for her feather light, melt in your mouth krust (bowties). The cookie was a favorite at bake sales. She was a former member of the Pulaski Club and with Stanley were the last King and Queen of the club. She continued this volunteer work at Immaculate Conception. She was a proud member of the Catholic Daughters of the Americas. Aniela enjoyed playing cards (gin rummy), taking walks, gardening and cooking. She was an expert at making traditional Polish Foods. In her later years she loved seeing her great grandchildren. Survivors include her son, Richard Grondek and his wife, Mary Jane Andrie of Council Bluffs, Iowa; six grandchildren, Joel Grondek, Elizabeth (Grondek) VonSeggern, Allison (Grondek) Davis, Laura (Andrie-Grondek) Gjere, Andrew Grondek and Austin Andrie-Grondek; eight great-grandchildren; Mackenzie Gjere, Kennedy Davis, Jardin Ridnour, Landon VonSeggern, Delilah Gjere, Madalynne Davis, Joel Grondek, Jr. and Axel Gjere; and several nieces and nephews. She was preceded in death by her parents; her husband, Stanley Grondek, her brother, Jan Grochowska, her son, Roman Grondek, and her granddaughter Jody Grondek. Honorary pallbearers will be Joel Grondek, Andrew Grondek, Austin Andrie-Grondek, Mike Jablonski, Lucian Bratkiewicz and John Sparks. Memorials in her name may be directed to Catholic Charities, who sponsored Aniela and her husband when they immigrated to the United States.

The family of Aniela "Nellie" Grondek created this Life Tributes page to make it easy to share your memories.

Send flowers to the Grondek family.