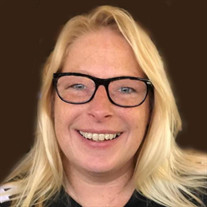 Our mother, daughter, sister, and friend Andrea K. (Beaubien) Carroll, 49 of Sioux City went to be with God and her husband David Carroll on April 17, 2020. A Memorial visitation will be Wednesday, April 22 from 4 to 8 pm at Christy-Smith Funeral Homes Morningside Chapel. Private family graveside services will be at a later date. Condolences may be sent to the family online to www.christysmith.com Andrea was born August 5, 1970 to Vincent and Juanita (Davis) Beaubien. She grew up in Correctionville and attended Eastwood High School graduating in 1988. Andrea started her career at Gateway Computers in 1989. On August 28, 1999 Andrea married David C. Carroll. Andrea spent 20 years with Gateway Computers. During her last few years at Gateway she also attended Western Iowa Tech and graduated in 2007 and then received her bachelor’s degree in social work from University of South Dakota in 2011. She worked for the Iowa Department of Health and Human Services from 2011 to 2013. Andrea was currently employed with Sabre Industries. Those who knew Andrea Carroll knew she struggled with her mental health for some time, especially after losing David. She was the best mother, daughter, sister, etc. She did everything with her whole heart. Andrea loved spending time with family and friends. She loved reading, listening to music, watching movies and her favorite sitcoms, playing cribbage, electronic Yahtzee and playing with her dogs. She was a sweet and caring person with a beautiful soul. Andrea fought and worked hard to achieve her goals and dreams in life. She will be greatly missed by all who knew her. We love her so much and are so happy we have the great memories with her. We love you in our hearts Andrea Kaye Carroll forever and always. Those left to cherish and honor her memory are her children, Shey Beaubien and his fiance’ Cassandra Wilson of Cedar Rapids, IA, Josey Carroll of Sioux City, mother, Juanita Beaubien of Correctionville, brother, Bryan Beaubien of Correctionville, 4 sisters; Angela (Tom) Kayl of Lawton, Jaimee Beaubien, Holly Beaubien and Elaine Hansen all of Sioux City, grandfather, Larry (Teena) Davis of Colorado Springs, CO, mother in-law Diane (Dennis) Bogenrief of Sioux City, father in-law Gerald (Jacqueline) Carroll of International Falls, MN, sister in-law Laurie Carroll of International Falls, MN, special friend, Kelly Upton of Sioux City. Other survivors include numerous nieces and nephews, aunts, uncles, cousins and amazing friends. She was preceded in death by her husband David, father Vincent, paternal and maternal grandparents and her aunt Jan Wright. Check on even your strongest friends and always remember you are not alone.

Our mother, daughter, sister, and friend Andrea K. (Beaubien) Carroll, 49 of Sioux City went to be with God and her husband David Carroll on April 17, 2020. A Memorial visitation will be Wednesday, April 22 from 4 to 8 pm at Christy-Smith... View Obituary & Service Information

The family of Andrea K. Carroll created this Life Tributes page to make it easy to share your memories.

Send flowers to the Carroll family.