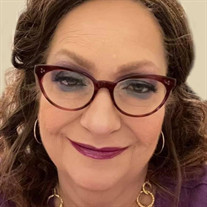 Amy Reinert, age 60, of Sioux City passed away Friday, August 27, 2021, in Omaha, NE. Memorial Service will be 11:00 a.m. Friday, September 3, 2021, at Christy-Smith Funeral Homes, Larkin Chapel located at 2320 Outer Drive North. Visitation will be held one hour prior to the service. Burial will be at a later date. Amy Anne Reinert, the daughter of James and Lola (Strehl) Reinert was born on January 22, 1961, in Escondido, CA. She grew up in Sioux City and attended North High School. She also graduated from Western Iowa Tech with a Degree in Graphic Design. Amy lived a majority of her life in Sioux City, raising her son, Jason, with stops in Arizona, Rhode Island, Nevada, and Milford, IA. She worked in many different fields but she most loved her career with the Sioux City Musketeers, as she was an avid hockey fan. Amy had an eye for interior and graphic design and loved to make her surroundings beautiful. She was very creative and loved painting. She had a great sense of humor and could spice up any conversation. Amy was also a very proud grandparent and loved spending time with Lola and Jake. Those left to honor her memory are Jason (Margarite) Reinert of Sioux City, their daughter and son, Lola and Jake; three sisters, Susie (Steve) Rodriguez, Jami Krause, and Toni Duncan; nieces and nephews, Eric (Maggie) Krause, their daughter, Skylynn of Sioux City IA, Amanda Whittington, her daughter and son, Aubrey and Jackson of Sioux Falls SD, Austin Rodriguez, Angela Duncan, Allisa and Allexa Johnson, great-nephew, Ethan Garnet, all of Sioux City IA. She is preceded in death by her parents, Lola and James Reinert; her husband, Alan Kaye; Aunt, Laura Meredith; brother-in-Law, Cardy Krause

The family of Amy Anne Reinert created this Life Tributes page to make it easy to share your memories.

Send flowers to the Reinert family.