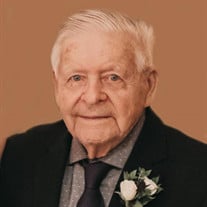 Alvin Otto Zellmer, 92, of Lawton passed away peacefully on Friday, April 9, 2021 at his family home. A visitation will be held from 4:00 to 8:00 p.m. with family present at 5:00 p.m. and prayer service at 7:00 p.m. on Friday, April 16 at Christy-Smith Morningside Chapel, 1801 Morningside Ave. Sioux City, IA 51106. A funeral service will be held at 10:00 a.m. on Saturday, April 17 at St. Luke Evangelical Lutheran Church, 2039 S St Aubin, Sioux City, IA, 51106 with burial following at Banner Township Cemetery in Lawton, IA. Alvin was born July 19, 1928 in Lawton, Iowa. He spent his childhood on his father’s farm north of Lawton. He graduated from Lawton High School in 1946. That year he also was a Champion in the Golden Gloves boxing competition at the Welterweight of 147 lbs. He married Barbara Lea Hansen on December 14, 1950 at Trinity Lutheran Church, Sioux City, IA. Alvin lived on his farm for 71 years, sharing his life with Barbara as they built a busy family home filled with 6 children, love, and happiness. As a farmer Alvin was a steward of the land, which provided support and a way of life for his family. He was a long-time member of St. Luke Evangelical Lutheran Church and more recently First Baptist Church in Climbing Hill, where he was a blessing to his church community. He was very talented in mechanical repair ranging from tractor and farm equipment to automotive and even washing machines. His hobbies included hunting, birdwatching, rock collecting, science and astronomy. He loved spending time with his kids and grandkids and was known amongst those who loved him for sharing quick-witted jokes and ice cream after dinner. His gentle love, quiet humor, and warm smile will be missed and not forgotten. Alvin is survived by his three sons, James (Donna) Zellmer of Simpsonville, SC, David (Karla) Zellmer of Lawton, and Keith (Pam) Zellmer of Kosovo; his three daughters, Kay Zellmer of Sioux City, Laurie (Ronald) Law of Lawton, and Leann (Andrew) Orr of Sioux City; 21 grandchildren, 39 great-grandchildren; his brother, Raymond Zellmer; and sister, Arlene Bergendahl. He was preceded in death by his wife Barbara; his brothers, Harold, Don and Ervin; his parents, Otto and Bertha Zellmer; and infant great-grandchildren. Memorials may be directed to First Baptist Church, Climbing Hill, IA for designated fund assisting with medical expenses of granddaughter, Christina Zellmer. “His lord said to him, ‘Well done, good and faithful servant; you were faithful over a few things, I will make you ruler over many things. Enter into the joy of your lord.” (New King James Version, Matt.25:21)

The family of Alvin Otto Zellmer created this Life Tributes page to make it easy to share your memories.

Alvin Otto Zellmer, 92, of Lawton passed away peacefully on Friday,...

Send flowers to the Zellmer family.