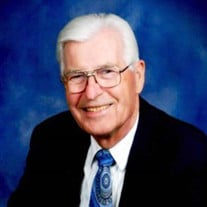 Alois Tschampl of Hinton, Iowa, age 83, died on Monday, January 11, 2021, of natural causes not related to Covid-19. Visitation will be 5:00-7:00 p.m., Thursday, January 21, 2021 with a parish vigil service at 6:30 p.m. at Christy-Smith Funeral Home, Larkin Chapel, 2320 Outer Belt Drive N., Sioux City, IA. Services will be at 11:00 a.m. central time on Friday, January 22, 2021, at Holy Cross Parish – St. Michael Catholic Church in Sioux City, IA with Fr. David Hemann officiating. The service will stream live on Holy Cross Parish web and Facebook pages, (holycrosssc.org). Burial will be at Calvary Cemetery, with military honors held in the Mausoleum. Those wishing to partake in the services may view a live-stream on the Holy Cross Parish Website (https://holycrosssc.org/alois-tschampl-funeral ) or the Holy Cross Parish Facebook page (Holy Cross Parish Sioux City). Condolences may be sent online to www.christysmith.com. In lieu of flowers, the family requests a donation be made to Trinity Heights Queen of Peace in honor of his life, trinityheights.com or to Catholic Relief Services, crs.org. Alois was born Feb 23, 1937, in Smuka, Slovenia. He was the son of Alois Tschampl, born 1883 in the Gottschee Region, and Rosalia Sore, born 1904 in the neighboring village of Schaufel, Yugoslavia. He survived WWII with his family and was raised in a refugee camp in Feffernitz, Austria. He graduated tailoring trade school at the top of his class in 1955. He immigrated to the USA in Jan 1956, by way of the USS General Langfitt, and became a naturalized citizen in 1961. He married Carol Meier on Sept 29, 1962, in Danbury, Iowa. He served with the US Army Reserves from 1960 to 1966. He was employed as Head Tailor and Manager at Morey’s and Raymond’s Menswear Store in Sioux City from 1956 until it closed in 1997. He continued tailoring until he retired in 2015. He also was an owner and manager of rental properties. Alois was involved with the inception of the Trinity Heights Queen of Peace Shrine and served as a founding board member from 1985 through 2010. His devotion to Mary was instilled by his mother’s faith and was a means to honor Mary for her intercession in his family’s survival and reunification after WWII. He was a member of Toastmasters International, the Jaycees, and the Success Motivation Institute and was an award-winning motivational speaker. He was a member of St Michael’s Catholic Church and a former member of St Casmir and St Francis Catholic Churches. Alois was a dedicated member of multiple church ministries to include Cursillo, Lector, Lay Eucharistic Minister and Choir. He was also skilled at organic gardening, animal husbandry, home improvements and construction. He was an avid outdoorsman who enjoyed learning languages, dancing and playing pool, ping pong and chess with his family and friends. He is survived by his eight children, Alois Charles Tschampl and his wife Wendy of Minnesota, James Tschampl and his wife Lisa of Idaho, Carol Lee Tschampl-Diesing and her husband Roger of Nebraska, Rebecca Gonzalez and her husband Anthony of New Jersey, Mark Tschampl and his wife Lauren of Idaho, Cynthia Tschampl and her husband Kimball of Massachusetts, Heidi Gizaw and her husband Gabriel of California, Michael Tschampl of Colorado; his three sisters of Austria, Josefa Schemitsch, Erna Tschampl, Elfride Kircher and her husband Walter; and 18 grandchildren! He is preceded in death by his parents; his wife, Carol; and his siblings, Johann, Franz, Maria, Josef, and Rose.

The family of Alois Tschampl created this Life Tributes page to make it easy to share your memories.

Send flowers to the Tschampl family.