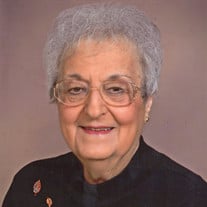 Alma M Coury, 94 lifelong resident of Sioux City, IA died on Thursday, November 14, 2019, at Countryside Nursing Home in Sioux City, Iowa. A Memorial service will be at 11:00 AM on Wednesday at Immaculate Conception Catholic Church of the Mater Dei Parish located at 1212 Morningside Ave Sioux City, Iowa 51106. Interment will be in Calvary Cemetery, Sioux City, IA. Visitation will be from 4:00 PM to 8:00 PM and family will be present from 6:00 PM to 8:00 PM on Tuesday, November 19, 2019, at Christy-Smith Morningside Chapel, 1801 Morningside Ave., Sioux City, Iowa. Online condolences may be made to the family at www.christysmith.com Alma was born November 20, 1924 in Sioux City, IA to Charles & Bertha (Owen) Coury. She grew up and attended Immaculate Conception grade school and later graduated from East High School in 1942. After graduation she went to work at Corn Belt Supply until they closed and then at St. Luke’s Hospital until retiring. Alma was a faithful and loyal employee. She was a lifelong member of Immaculate Conception Catholic Church. Alma's faith was very important to her. She volunteered at church every Wednesday, working on the scrip program for many years. The faith and loyalty she showed at church flowed over into every aspect of her life. Alma was a New York Yankees baseball fan, even though the rest of the family were Cubs fans, she resisted their many attempts to convert her over and remained an avid Yankee’s fan. She also loved the Iowa Hawkeyes. Alma enjoyed playing cards, Yahtzee and the occasional trip to the casino. Aunt Alma, also known as Double A, Aunt Al or Aunt Almaza was treasured by her nieces, nephews and their families. She was dearly loved and will be missed by all. Survivors include her 3 nephews, George (Cindy) Rehan of Sioux City, Robert (Mary) Rehan of Sioux City, Tom Coury of Wellington, KS; 5 nieces, Renee Coury of Omaha, NE, Susie (John) Broberg of Overland Park, KS, Liz (Steve) Bauer of Denver, CO, Kathleen Barrett of Pomona, CA, and Noreen Eskildsen of Sioux City Alma was preceded in death by her parents; sister, Lourice Rehan; 3 brothers, Ernest, Fred, and Elias Coury; 2 nephews, Bob Coury and Dennis Cutting; and 2 nieces, Sandy Rehan and Mary Cain. In lieu of flowers, donations can be made to Immaculate Conception Catholic Church or to Bishop Heelan Catholic High School.

The family of Alma Marie Coury created this Life Tributes page to make it easy to share your memories.

Send flowers to the Coury family.