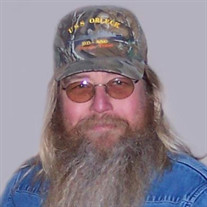 Albert B. “Al” Erickson, 70, formerly of Sioux City, IA, died Monday, December 6, 2021, at his residence in Beresford, SD. A visitation will be 10:30 am to 12:30 pm Monday, December 13, 2021, at Christy-Smith Funeral Homes, 1801 Morningside Avenue, Sioux City, IA. Burial will take place the same day in St. Ann’s Catholic Cemetery in Humboldt, SD, with Military Honors provided by the American Legion Post #62. Online condolences may be expressed to the family at www.christysmith.com. Al was born April 23, 1951, in Sioux City to Geraldine and A. Bert Erickson. He attended Joy School, East Junior, and graduated from East High School in 1969. Three weeks after graduation, Al enlisted in the United States Navy and served his country for six years, including two tours in Vietnam. In 1978, Al married Gayle Kollasch in Sioux City. They made their home in rural Elk Point, SD and North Sioux City, SD before retiring to rural Beresford. Gayle died in 2020. After being honorably discharged from the Navy, Al worked in construction and the maintenance department of several packing houses in Sioux City. In 1978, he went to work for Iowa Public Service (MidAmerican Energy) at the Port Neal Complex. Later Al worked at Kirk Station and over the next 35+ years, he worked in the Gas Department and the Electric Department in Sioux City. Al retired in 2013 as a combination gas and electric locator. Al was a member of the International Brotherhood of Electrical Workers Locals 1302, 880, 189, and 499. He was a pensioned member of L.U. 499 at the time of his death. During the years, Al was appointed to and elected to various offices in Local’s 1302, 880, and 189. Al was a member of the American Legion Post #62 of Humboldt and the Veterans of Foreign Wars. He was also a member of the USS Orleck (DD886) Association and The Southeast Texas War Memorial & Heritage Foundation. Al was an avid hunter as well as target shooter. He also enjoyed reading, cooking, gardening, the internet, and listening to classic rock and roll music. Al is survived by his sister, Kris (Rick) Lenzen of Maple Lake, MN; nephews, Craig Lenzen of Minneapolis, MN and David Lenzen of Corcoran, MN; and great-nephews, Evan and Ian Lenzen of Corcoran, MN. He was preceded in death by his parents and his wife.

The family of Albert "Al" Erickson created this Life Tributes page to make it easy to share your memories.

Send flowers to the Erickson family.