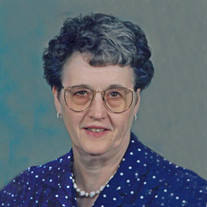 Adele M. Hansen, 84 of Sioux City, Iowa, died on April 19, 2021, at her residence surrounded by her family. Funeral services will be held at 10:00 a.m. on Friday, April 23, 2021 at Morningside Lutheran Church (700 South Martha St.) with the Reverend Tom LoVan officiating. Interment will be in Riverside Cemetery, Akron, IA. Visitation will be on Thursday, April 22, 2021 from 4:00 p.m. to 8:00 p.m., the family will be present from 6:00 p.m. to 8:00 p.m. with a prayer service at 7:00 p.m. at Christy-Smith Larkin Chapel (2320 Outer Drive). Online condolences may be made to the family at www.chirstysmith.com. Adele was born November 4, 1936 in Hinton, IA, to Arthur and Louise (Doyen) Rozell. She grew up near Akron, IA, graduating from Akron High School in 1955. She married LaRue B. Hansen, on July 8, 1955 in Akron, IA, at Trinity Lutheran Church. The couple lived in Long Beach, CA, while LaRue was serving in the Navy. Upon his honorable discharge, the couple returned to the Hawarden, IA, area, where he worked for a local farmer for several years, near Brunsville, IA. The couple later moved to Sioux City, where she worked for the Woodbury Bank, later becoming First National Bank as a teller/loan officer. Adele later worked for Hawkeye Bank / Morningside Bank and Trust. In the early 80’s she worked in the business office of Morningside College, until 1990 when she went to work for the Jone’s Eye Clinic. Finally retiring in 2009. Adele was a member of Morningside Lutheran Church, she belonged to the ladies’ circle, served on the funeral lunch committee as well as a Sunday school and Bible school teacher for many years. Her hobbies include gardening, dancing, playing cards with friends on Friday nights, spending time with family at Lake Sarah in MN and family time in IA. Left to cherish her memory is her daughter, Pamela Hansen of Sioux City; sister, Phyllis (Glenn) Hamann of LeMars; sister, Delores (Gerald) Westhoff, Craig, IA; brother, LeRoy Rozell of Akron, IA; sister, Karen Hartman of Sioux City; and numerous nieces and nephews. She was preceded in death by her husband, LaRue; her parents, Arthur and Louise Rozell; her father and mother-in-law, Melvin and Alice Hansen; brother-in-law, Arlan Oltmans; brother-in- law, Dick Hartman; brother- in-law, Curt (Barbara) Hansen; three nephews, Jeff Klemme, Steve Westhoff, and Mike Swindell. Memorials may be directed to Morningside Lutheran Church.

The family of Adele M Hansen created this Life Tributes page to make it easy to share your memories.