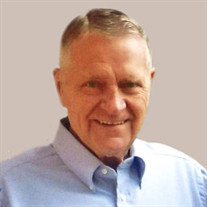 A. Wayne Anderson, 85, of Papillion, formerly of Sioux City, died Tuesday, May 14, 2019, at Hillcrest Country Estates Memory Support in Papillion. Services will be at 1:00 p.m. Friday at Morningside Lutheran Church in Sioux City. Visitation will be noon until service time Friday at the church. A reception will follow at Christy-Smith Resource Center in Morningside. Arthur Wayne Anderson, the son of Arthur and Petra (Valen) Anderson, was born on Dec. 21, 1933, in Sioux City. He grew up in Morningside and graduated from East High School in 1952. Wayne went on to take courses at Augustana College in Sioux Falls, S.D., until he was drafted into the U.S. Army (11th Airborne) for two years. He continued his education at the National Business Training School followed by classes at Western Iowa Tech Community College. On June 8, 1963, Wayne was united in marriage with Carolyn Jean Meyer at The Little Brown Church in the Vale in Nashua, Iowa. Wayne worked for 32 years as a drafting technician for the city of Sioux City. He was a loving husband and father, who enjoyed coaching softball. He coached 124 games during his four-year tenure for the Siouxland Youth Athletics Program. His team, Sioux City Police, won the city championship during the 1982 season. The couple moved to Nebraska in 2015. Wayne is survived by his daughters, Julie (Tim) Sorensen of Papillion, Jerri (Bill) Salber of Omaha, and Jill (Pat) Amundson of Vermillion, S.D.; seven grandchildren, Colin and Katelyn Sorensen, Billy, Marissa, and Madison Salber, and Megan and Morgan Amundson; a brother, John (Judy) Anderson of Sioux City; and many other relatives and friends. He was preceded in death by his wife; parents; sister, Phyllis (Don) Carlson; and brother, Clarence (Janice) Anderson. The family wishes memorials be directed to the Siouxland Youth Athletics Softball Program in memory of Wayne. Donations will be put in a scholarship fund for girls who cannot pay to play.

The family of A. Wayne Anderson created this Life Tributes page to make it easy to share your memories.

Send flowers to the Anderson family.